Spend about 10 minutes with a 5-year-old and you’ll find yourself running out of answers to the question every kid loves to ask: “Why?”

We’re born with innate curiosity and the desire to learn. During infancy, the world is an endless canvas of sensory stimulation, most of which we’re just trying to absorb. Once we reach childhood, we try to make sense of what we see, hear, do, touch, taste and smell. In adolescence, our autonomy grows and we want more control over our surroundings, looking for ways to push the boundaries despite what we’ve already been told about why things are the way they are. Early adulthood brings with it the desire to enact change, to create our own “why” with regard to choices in education, career, and so on. And then later in life, when we possess long-established beliefs and boundaries, a child will come along and ask, “But…why?” and we’ll watch the next generation establish their own truths, perspectives and outlook on the world.

I often compare my journey in Ashtanga yoga to the life cycle: from first exposure to the practice, dazzled by bendy bodies and the desire to practice like the advanced students, to my “adolescence” when, after being told by my teacher to take a step back and stop pushing so hard toward third series, I ran away from my home studio to practice with someone else, only to end up injured and resentful. Now having entered the early adulthood of my yoga practice, I have a deeper understanding of what the practice is really about and a desire to share what I’ve learned with others in a way that will prompt them to ask, “Why?”.

When I teach teacher trainings, I always tell students that “Why” is the most important question they can ask themselves (i.e. “Why am I doing this practice?”), as well as ask of their teacher. I remember having such adoration and respect for some of my teachers over the years that I took everything they told me for face value. For example, I met a woman in India whose instructional style was so strong, certain and, if questioned, demeaning, that the little girl in me who always wanted to be right and please the teacher would do anything she asked. So when told to soften my gluteus muscles in every backbend, I didn’t question the instruction. When I deactivated those muscles, the teacher was happy, and that was the only evidence I needed that it was the right thing to do.

In fairness, this teacher rationalized softening the largest muscles in the body, explaining that this would help us to “find our legs” and get us to better connect to our hamstrings. What wasn’t taken into account was the intrinsic relationship that the glutes and hamstrings share, whereby these muscle groups act synergistically as complementary parts of the posterior chain.

Despite all that is now known about the beneficial role the glutes can play in backbends, along with the rest of the asana practice, there are still teachers out there telling their students to relax their bums. When I hear that cue, I wonder what the teacher’s answer would be if a student were to ask them, “Why? Why should I soften my glutes when it feels good not to?”. More often than not, these teachers are simply regurgitating an instruction that was given to them years ago, perhaps along with the justification that their teacher originally gave to them, which could sound something like, “Engaging the glutes promotes too much external rotation, which can result in compression of the SI joint.” And then that’s the end of the story. There’s no discussion about how the glutes also promote hip extension, a key requirement in healthy, pain-free backbends. There’s no room for exceptions to the rule and instead only a universal instruction to relax a part of the body that is actually designed to keep us aligned, safe and strong.

This is just one example of many dogmas that not enough students question. Now that I am about to lead a teacher training program, one of the guiding principles we’ll employ is that of asking, “Why?”. This type of inquisition will be applied to the physical practice—i.e. “Why do we always practice a pose on the right side first? Why breathe through the nose instead of the mouth? Why are poses sequenced together in a certain way?” We’ll also apply “Why?” to meditation, encouraging students to question why a sitting practice is important, while also discussing principles of teaching and the ethics behind them. Such exploration uncovers answers which are sometimes arbitrary, albeit traditional, as well as explanations based in science that are difficult to dismiss.

No matter the subject, the best part of asking “Why?” is that it promotes internal dialogue, as well as conversation and debate, which can in turn lead to further discovery. I recently came across an article online which describes how:

“the people with the highest quality knowledge are the ones who routinely explain things to themselves as they learn. That is, these people consistently ask themselves “Why?” and then answer that question as they learn. When people self-explain in this way, they help to fill in the gaps in their knowledge, which gives them the raw material they need for innovation later.”

Tradition is important, but I’m all for innovation. And the only way of finding that innovative path is to first question the one we’re already on. 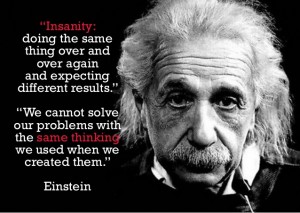