In a Goa State of Mind

It’s hard to believe that our second week at Purple Valley is already halfway over.  I’m not ready for this experience to end – so I’m staying!  That’s right…instead of moving on to Rolf and Marci next week as originally planned, Amy and I have decided to spend more time practicing with Petri.  She’ll stay on for a third week, while I’m playing with the idea of staying right through until the end of the month.  My practice has felt really strong here, and I want to seize the opportunity to see what more concentrated study with Petri could bring.

At the end of the month, I can still go to Rolf and Marci’s, as I’ll have two more weeks in India before heading home.  Of course, this means that my trip will be quite Goa-centric and that I likely won’t do much traveling around.  I’m honestly not all that keen on traveling alone here though.  But I won’t completely rule out the possibility just yet.  There’s no telling what the next couple of weeks will bring – regardless, I’ve promised myself that this won’t be my only trip to India, so there will be more chances to explore this amazing place in the future.

As for the current adventure, we’ve been out and about in Goa more and getting an idea of what else is going on here besides yoga!  Last week’s outings included Wednesday’s “day market” – huge, hot, teeming with locals urging us to “come look my shop” – Friday’s trip to the Tropical Spice Plantation (who knows where cashews come from? I do!), and the Saturday “night market” – imagine the One of a Kind Show (for those of you who’ve been in Toronto), only it’s outside, about 5 times the size (at least), add in some alcohol, hash and other narcotics, and grant free entry to the citizens of world currently calling Goa home.  Needless to say, it was quite a scene.  Last weekend we also went for dinner at La Plage (a sunset-seeing hotspot), and ventured to Anjuna beach to suntan amongst cows and splash in the sea. 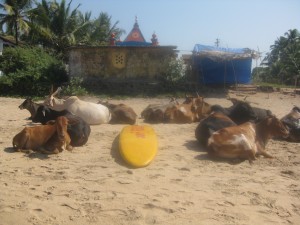 The beaches here are constant sources of entertainment.  Aside from the endless parade of travelers, locals and ex-pats, there seems to be an endless stream of vendors trying to entice us with their various goods and services.  Women pass by carrying gigantic baskets of fruit on top of their heads; others offer henna tattoos, while countless men seem all too willing to provide massages: “Madame? Massage? Head? Toe? Back? What you want? I do very good, cheap price. C’mon!”  After I turned him down, I was happy to see that a very hairy man a little ways down the beach had taken him up on the offer. 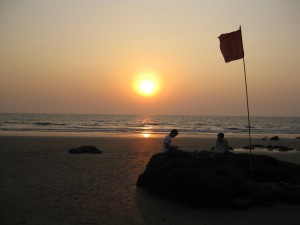 Back at Purple Valley, both my dad and I have continued to enjoy all that this retreat centre has to offer.  We’ve become addicted to the yummy food, accustomed to 9pm bedtimes and 5am mornings, and beyond comfortable with days spent lounging around between yoga classes, chatting with new friends.  Dad has been part of the regular Mysore class since Sunday, and while some days are better than others, he’s most definitely making progress.  To follow up on my prediction from the last post…Dad has now said that it’s his goal to make it through as much of the primary series as possible by January 2012 (which is coincidentally when Petri will offer a one-month retreat in Thailand).  Only a month ago, he was struggling to put together a sun salutation; now he’s breezing through them and looking toward seated postures that he would have previously deemed impossible.  So if you’re reading this thinking, “It’s too late for me to start doing yoga,” you’re wrong!  It’s never too late.

And in personal practice news, I had my own little breakthrough on Sunday.  There’s a pose at the end of second series – Supta Urdvha Pada Vajrasana – which has been my Everest for some time now. And I’m talking years here…I was seriously beginning to think I would NEVER hold on to my toe and make the transition as seamlessly as others around me seem able to.  Since I couldn’t complete this pose, instructors who teach Ashtanga in the “traditional” sense have held me back from Third series.  So I spoke to Petri about the trouble I was having with this pose, and then he took a look at what I was doing wrong during practice.  After just a little suggestion (which I’ll share with others who struggle with those pose when I get home!), everything just came together.  I held my toe while attempting the pose on both right and left sides, and even managed to stifle the “YAHOO!!” and instead muster just a little smile at my accomplishment (no yogi ego, right?).  After I completed the second side, Petri told me I was “ready for the third”.  Since I’ve been dabbling in Third Series at home, I hope to now spend some concentrated time really diving into the first few poses.  So that’s been part of my impetus to stay on here for at least another week.  The momentum is with me, so why interfere? 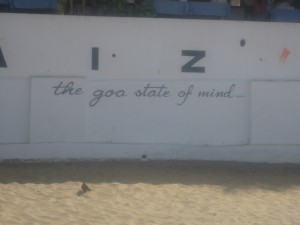 On a final note, I just want to thank everyone for all of your comments and kind words regarding the blog and my writing.  I’d love to send individual replies back, but the Internet connection here is not always reliable, and just getting these posts up takes all the patience and brainpower I can muster these days.  But do not think your comments are going unnoticed, I’m grateful for each and every one of them.