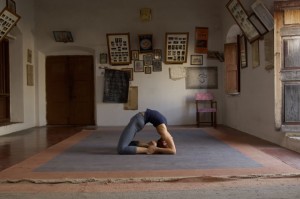 A few months ago, my friend and colleague Nicky Poole gave me a birthday card with the above image on the cover.  The photo was taken by Tim Rosenthal, who has photographed some of the world’s best-known asana practitioners. Visit his site and see these extraordinary images for yourself.

After opening the card, I tacked it to the wall above my desk, where it stares at me everyday. I look at with both longing and skepticism.  Longing, because that used to be me in the kapotasana photos, bending my body into a shape that was simultaneously freeing, empowering and energizing.  Unlike many Ashtangis who consider “kapo” to be the bane of their 2nd series practice, I looked forward to the pose where I could move slowly, without any pain, and experience what it’s like to rest my hands on my heels before I could even see them.

But the skepticism? Well, the skepticism comes from the past year that brought with it more injury than I have seen since I started practicing yoga asanas (postures) over eight years ago. There was no acute moment of pain, where we say to ourselves, “Oh shit. I’ve really done it now…I hope I can get out of this so I can get home and fall apart.” No, that never happened to me. Instead, it was a slow burn—or as my teacher Ron Reid calls it, a quiet whisper, where there’s a nagging sensation that’s not yet strong enough to get you to stop doing what you’re doing, which gradually gets louder and louder until the point where what was once a whisper is now screaming at you.

For me, the whispers started when my teaching schedule began to intensify. I started leading early morning Mysore classes at Downward Dog Yoga Centre, took on a full load of private clients, while also teaching my classes at 889 Yoga. I taught seven days a week, in a routine that had me up at 5am everyday. Anyone with an ounce of sense told me it was unsustainable. Something had to give.

But rather than turn down any of the work coming my way, I let my body take the hit. I became physically drained, but continued my regular asana practice as if nothing in my life had changed. I lacked energy and awareness, but grew so accustomed to being tired that fatigue became my normal state. My practice lacked integrity, so the advanced postures I was accustomed to taking on without hesitation started to wreak havoc on my body. A small nagging twinge in the right side of my lower back grew over the course of a few months until making my bed became close to impossible.  Whenever I’d bend down to give an adjustment in class, I’d stand up with pain shooting through my back and right hip. It wasn’t good.

As anyone who’s had this kind of injury knows, along with physical pain comes emotional anguish. I felt like a complete fraud, guiding people through a physical practice that was supposed to be healing, while meanwhile I was walking around trying not to wince each time I stepped off a curb too rigidly.  I began to question what I’d done wrong; what information gained over the years had been misunderstood or processed incorrectly? How many others had I passed my mistakes on to? Did their backs hurt now? I felt guilty, confused, and often unqualified to be standing on the mat at the front of the room.

Finally I was given a recommendation from a student and friend of mine to see a chiropractor who employed alternative therapies like Active Release Technique and acupuncture with electric stimulation.  After only two sessions with Dr. Alwyn Wong, I felt like I had my body back. I was practicing again—albeit gently—without pain. I could teach without worry, and everyday tasks were just that, rather than frustrating little reminders of the damage I’d done to myself.

It didn’t take long to figure out, however, that no matter how excellent Alwyn’s treatments were, I was undoing his work in my practice.  There were deep-seated imbalances that I’d learned to accommodate in every pose, especially the more demanding ones, that would send me back to him every month. Alwyn is the type of chiropractor who doesn’t want to see his clients…when we show up on a regular basis, he knows something isn’t working.

I knew something else had to change, so I started to experiment with my practice. I spent more time on my mat alone, figuring out what felt good and what didn’t.  I’d make a note of what I’d done in practice so that if I started to stiffen up or feel pain later, I’d have an idea of what had caused it. Conversely, I started to understand which asanas were purely therapeutic.  I reconnected to the foundation of what yoga is supposed to be about—a healing connection to our true self, a therapy separate from ego and the pursuit of perfection.

From there, I ventured off my mat to try my hand at other forms of movement and exercise. I started Spinning (cycling on a stationary bike) again, reconnecting to the activity I’d done regularly as a university student before discovering yoga. I tried CrossFit and nearly passed out, but found the difference between this truly high-intensity workout and what I was accustomed to in my practice fascinating. I looked up my local indoor rock-climbing gym and went for a lesson, only to discover a whole new subculture and alternative means of using my body.

Finally, I landed in the hands of Geoff Girvitz, owner of Bang Fitness. Working with both Geoff and Alwyn, I’ve begun to understand what’s wrong—what muscles are working and which ones aren’t—and from there am starting to create new patterns, teaching my mind and body to communicate in different ways. Thankfully, it’s working.

Throughout the process I’m remaining faithful to my long-term love, never straying too far from my yoga practice but using the information from these other modalities to inform each asana.  I know that I will always practice and in some form teach yoga, but we all need to do more than just what we’re good at. Since beginning this experiment in other forms of movement, I’ve started to see bodies differently, and I value having a new lens through which to view the practice. Had I never been injured, I would have continued down the same path, never really questioning what I was doing or more importantly, what I was teaching.

I’m putting all of this out there because I know I’m not alone in being injured, or in being an injured yoga teacher. I think talking about pain, pressure and frustration is healthy, and teaches how we can move past these stumbling blocks toward a genuine sense of balance and ease. Being injured doesn’t make someone a bad teacher. Ignoring injury, however, does an injustice to the self, and to others, while violating one of the major precepts upon which yoga is based: ahimsa, or non-harm. In choosing to learn from our injuries, we bring more information to the practice, helping to elevate yoga from the realm of hobby into the realm of science and discovery.