The other day I was thinking back to last winter, February 2014, when I brought a small group of students to Nicaragua for a yoga retreat. Just a few months prior to that, I was worrying about that first solo retreat, and the idea of going it alone just wasn’t sitting well with me. I needed a partner in crime, someone who could share the responsibility of keeping people happy  regardless of the little snags that come up along the way with these type of trips.

At the time, I’d just begun inviting my friend Kathryn Bruni-Young to Lake of Bays to teach during the summer months. Over the course of the 2013 season we realized that our styles of teaching were complementary in ways we hadn’t previously imagined —for years, we’d worked at the same studio, but hadn’t spent much time in each other’s company or classes. I knew that she was teaching to the beat of her own drum, so to speak, which is why something in my gut told me she’d be a good fit for the Lake of Bays clientele. By the end of that summer, we knew that, together, we had something to offer that was pretty unique. 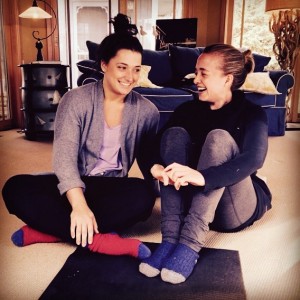 After co-teaching the first Muskoka Fall Wellness Weekend the following October and receiving rave reviews, I knew Kathryn was the right person for the Nicaragua retreat. So we ventured down there together and pulled off a fabulous week of yoga, movement and exploration. We realized wewere onto something with this partnership when we decided to “tandem teach” a class one afternoon on retreat; one of us would start the class and then silently signal to the other to take over, continuously switching back and forth from beginning to end in a way that was so seamless that everyone afterward asked if we’d rehearsed. The entire thing was done off-the-cuff and yet nothing about it was disjointed.

Since then, we’ve basically known that whatever one of us is thinking or doing, the other is 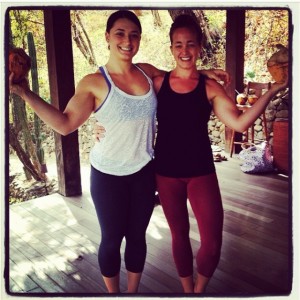 n’t far behind (except in scenarios where KBY is lifting more than twice my bodyweight, in which case I am lifetimes behind!). We continued to teach together and our approach evolved into weekend and week-long intensives, where we watched students transform their practice with the information we shared. People began asking if there was a name for what we were teaching, and until recently, we didn’t really have an answer.

As our horizons continued to expand, we knew 2015 would be a year of extensive growth, both individually and as a team. With more ideas swirling in our minds than we knew what to do with, Kathryn and I decided that it was time…we needed to put a name on our product and brand the style that was growing into something people sought out. After several late night brainstorming sessions, we arrived at what now feels like the most obvious name for what we do:

…creates a multidisciplinary approach to yoga, acknowledging that the “traditional” approach may not work for every body

…is fresh, exciting, intelligent and accessible.

Here is what one of our participants had to say about the Yoga Detour experience:

“As an instructional designer, I was very impressed with how Cecily and Kathryn structured their intensive, three-day workshop—a conscious building of ideas in practice, where sequencing not only made sense, but felt great in my body. Cecily and Kathryn have a wonderful working dynamic, they complement each other’s strengths and use their own stories of movement evolution to help their students understand that anything is possible! With their warm dynamic and extensive expertise, Cecily and Kathryn achieved the difficult task of creating a safe and inclusive learning space for our physical bodies, where participants felt comfortable to explore new forms of movement and ask questions specific to their own body experience…This workshop helped me to understand myself as an active agent in my physical health.”

We’re pretty excited about this project and can’t wait to share the Yoga Detour method with you. Our next intensive is coming up later this month in Toronto. In July, catch us at Lake of Bays Yoga and in October, we’ll be at De La Sol Yoga in Hamilton. If you’re interested in hosting a Yoga Detour training event, just let us know! And to stay in the loop with all that’s coming down the pipeline, be sure to #followthedetour and Like us on Facebook. We look forward to having you along for the journey!